Guest Post: 5 Great Tips (and one extra little one) for Haggling with Musicians

This is a guest post by Hariette Hale. A classically trained musician and graduate of City University and the Guildhall School of Music, Harriette can be found all over London at songwriters showcases, jazz clubs, recording studios, private functions and classrooms, tutoring the next generation of musicians. As a founding member of many functions band, including function band, FUNCNUT, and an active member of the musicians social network, Harriette runs Chocolate Box Music services. Find more about her here: www.HarrietteHale.co.uk

(Editor’s note: even though slightly different from the type of articles on this site, this is source of inspiration on how to approach clients for ‘function’ or ‘top forty’ gigs, with some sense of humour, making sure all the important things to make the gig successful-and the band happy-are taken in consideration)

1. Food and Drink.
Ladies, what’s the easiest way to a man’s heart? Be honest, it’s his stomach! Throw in a bit of grub and a few drinks for the band members and 9 times out of 10 you’ll be able to get a lower price. Plus, if you’re already providing nosh for your lovely guests then feeding a few more mouths is going to be much cheaper than forking out an extra £100 for your band. What’s more, a happy well fed band equals a happy well entertained audience!
2. Reduce the playing time.
If you have the time to faf around with your ipod or mp3 player before the big day then do it because a band are more likely to charge less for playing two 45minute sets than they are for three and you can just put your ipod on in the break. Win win all round!
3. Reduce set up and travel headache.
Reduce the stress for the band by scheduling the reception so that they don’t have to hang around for 2 hours before they start playing. Point out to them that they only need to be there 1 hour before they start playing to set up and can leave as soon as they’re finished and they will be much happier. Plus if you can guarantee a car parking space then that makes life much easier for them. A stressful gig is usually an expensive one. Muso’s like to be mollycoddled, bless em’ (they are mostly men), so do a little bit of extra work for them before hand and expect to pay much less. 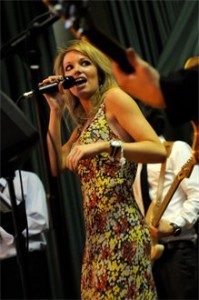 4. Photos.
Planning to have a photographer at the wedding? Persuade him or her to get a few snaps of the band and throw it into
your payment package. We’re all vain, we love the spotlight and the more photos we have of us doing what we love the better! So far we have nosh, a beer, a few free photos and a stress-free gig. Not bad going!
5. Finally, pay cash.
If you can, pay the band in cash before they start playing. Cheeky little sods are always dodging the tax man so if you don’t mind helping them out in that respect then they won’t add on the roughly estimated 20% for tax reduction or VAT. Plus, paying beforehand means they’re much happier when they hit the first tune and they’re actually more likely to keep playing beyond the given time.
6. Oh whoops one more…
May sound obvious but say thank you. A lot of the time, musicians get ignored so when someone makes the effort to say thank you it really makes our day! The more you gush about how amazing we are, the more amazing we will be and by this point you’ve already paid! Use the break between sets to butter them up and expect to party through the night!