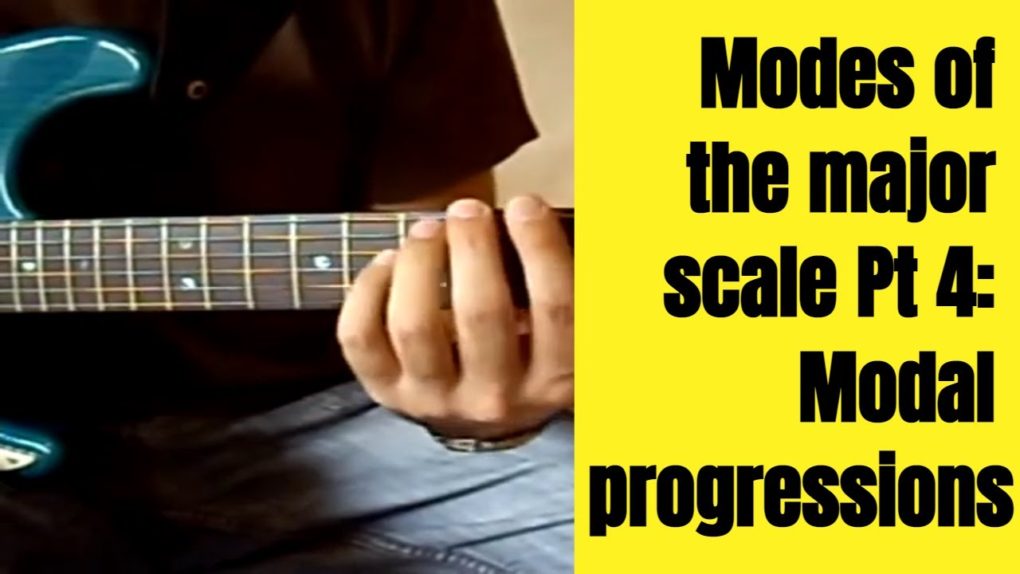 We have seen in the three previous videos where modes of the major scale come from and how to analyze them. Here I will show you how to use them. So in this video you will find a brief introduction to how to recognize basic modal chord progressions (=chords from part of a tune, or chords that make up an entire song). I also want to demystify something I always hear from a lot of younger players: you need to know modes only if you play jazz. The sequences of chords in the video are not just from jazz standards, but from a lot of pop, rock, funk tunes.

So, why do why have to recognize modal progressions? Well, once you have identified correctly the progression, you can use the correct mode to build a solo over it, or a guitar part, with all the right notes! An obvious example of ‘wrong’ modes recognition, is when, like in ‘Oye como va’, a soloist uses the Aeolian mode instead of the Dorian. One of the notes in the scale (the 6th) will clash with the chords played by the accompanist.  Or in “Flying in a blue dream” if you used C major to solo over it, when you land on the note F natural this will sound very wrong…as the song is in C Lydian which contains F# in it.

One thing I want to add to the video: I found a lot of examples on the net about people using the Spanish example E7 – F7 to identify a Phrygian progression…that is not correct as Phrygian is a minor mode and E7 is a major (dominant) chord. That type of progression takes the Phrygian Dominant (sometimes called Spanish Phrygian scale) which is the 5th mode of the Minor Harmonic scale. But that’s another lesson…

I will list below some songs that are built around a mode or a chord progression that is not only major or from the natural minor scale. I will add more examples as I run across more of them…for now these are just those from the video.

As we said Ionian=major scale…so all those songs that contain chords from the harmonized major scale and gravitate heavily toward the ‘I chord’ (e.g.=C major, if we are in the key of C major) . Usually, like when we say ‘this song is in the key of … major’ that’s what we mean.

All those songs that we call ‘minor’. An example I use in the video is ‘Europa’ by Santana where most of the original progression is in C aeolian in the original. Also the bridge of ‘Milestones’ (new) by Miles Davis is in A aeolian.

As I say in the video this mode and the progressions connected to it are not used a lot. Maybe a good example would be a long 2-5-1 in minor, like in the second four bars of ‘Windows’ by C. Corea.

← Modes of major scale pt3
Considerations on practicing – the power of your mind. →