We have seen in previous lessons how to build the harmonized scale from the major scale. In this video I show the application on guitar in three different keys, using 7th chords.

This is what I play in the video:

You can find the most used 7th chords here as well:

We have seen in this post https://www.giannichiarello.com/intervals-explained/ what intervals are in theory and how the simplest and safest way to identify an interval is by calculating the number of semitones between the two notes.  Again, this is the table for you to ‘do the math’:

If you look closely, you will notice that the notes that are contained in the C major scale (being the example from the note C) are all a major or a perfect intervals.

This stands true for all the major scales in every key.  So another quick way to find at what interval distance two notes are, is to calculate from the major scale.

How do I calculate intervals on guitar?

To  calculate intervals on guitar is not difficult at all as everything translate in exactly the same way. If I know the notes on the guitar neck this is all very simple as all I need to do is make the calculation like I did above. (Eg: if I am playing a C on the 3rd fret, 5th string and an F# 4th fret 4th string , that is a augmented 4th, just like above).

After a while you will see a some recurring ‘shapes’  and you will learn to quickly recognise an interval by the shape it draws on the fretboard, just like you do with chords: the following is an attempt to summarize all these shapes. Maybe not complete, but I hope it will help. 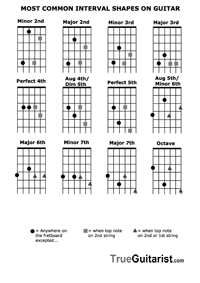 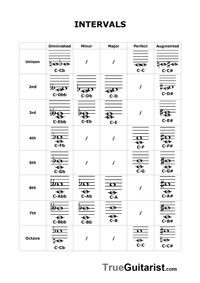 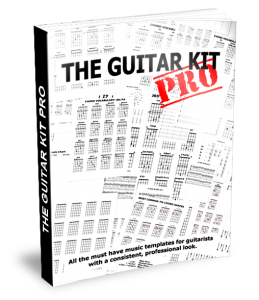 If you enjoyed the free version of ‘The guitar kit’, ‘THE GUITAR KIT PRO’ is an even bigger collection of music and guitar templates, that I personally use to teach, now available in a consistent and professional look.

Over 70 pages of print quality templates in both JPG and PDF format, customizable and brand-able (step by step instructions on how to add your own logo with popular programs are included).

All for only $19.95! Instant download, quick and safe checkout with Paypal.

I really like this style of phrasing, take some great examples like McCoy Tyner, and a lot of the ‘hard bop’ jazz cats. The basic idea is this: take a scale, in this example I will use a C major scale.

Now  play all the diatonic fourths contained in C major:

In the video I am playing on a Dm (Dorian) vamp, but you can use this phrasing technique on any scale, mode…have fun.

Posted in From the major scale to (hopefully) understanding how things work., Getting it all together

Let’s now go back to the basic theory post (quite successful over 10k views just the day I posted!) , and let’s see how things apply to guitar…just read the explanatins in red and watch the videos!

The natural sounds are:

You might also find in some books the name of these notes in Italian (nothing to do with ‘solfege’!) Do,Re,Mi,Fa,Sol,La,Si and in German C,D,E,F,G,A,H.

# = sharp: raises the given note of a half step.

One half-step on guitar is a fret, easy. When you move up a fret (from the headstock to the body of the guitar) you are playing two notes that are a semitone/half-step apart from each other. From G natural to G# you would move up one fret.

From G natural to G## you would move up two frets.

b = flat: lowers the given note of a half step.

From G natural to Gb you would move down one fret.

bb = double flat: lowers the given note of two half steps.

From G natural to Gbb you would move down two frets.

In this first video I start from the chromatic scale and show you how to build a major scale:

The chromatic scale contains all 12 natural and altered sound (using sharps and flats).

Notes called with a different name, but identifying the same sound, are called enharmonic (i.e.: C# e Db). The shortest distance between two sound of the chromatic scale is a Half Step, the distance of a fret on the guitar.

An interval is the distance between two notes.

All the intervals from the tonic of a major scale to any other note of tha scale are major or perfect (i.e. between C and D=major 2nd, C e E=major 3rd, C e F=perfect 4th, and so on…)

Intervals can also be calculated summing up half steps: one half-step on guitar is a fret, easy. When you move a fret up (from the headstock to the body of the guitar) you are playing two notes that are a semitone/half-step apart from each other.

How to build a major scale.

Read the theory and watch the video below:

The spacing of the notes in a major scales follow this rule:

Where W = Whole step (a major second)  H= Half step

These are the famous 5 ‘box’ movable patterns for the major scale. Of course you can
play all the major scales with these, as long as the tonic, aka the note that gives the name
to the scale, sits in the red circles. The example is in G major, like in the video, but as I
said, these patterns can be transposed to all major scales. The roman numeral stands for
the fret number. 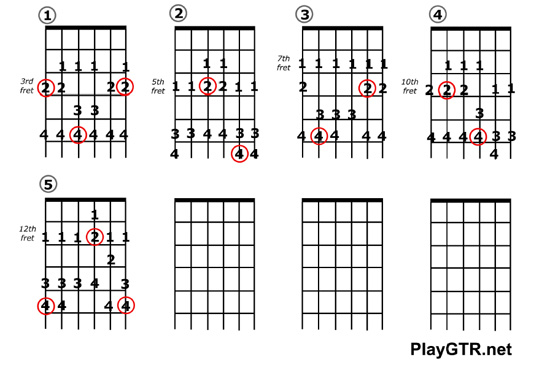 The Major scale template above is from TrueGuitarist.com’s ‘The Guitar Kit’, a free collection of guitar templates.

This is a list of all the major scales in all keys. The order follows the amount of sharps and flats in the key.

Every major key has one relative minor which is made of the same notes, but starting from the sixth note. In other words, starting a minor third below (or a major sixth above) the root of the major scale. For example if we take C major its relative minor is A minor, spelled A B C D E F G.

On guitar: To play the relative minor, just start two notes before the note in the red circle.

The circle of fifths one of the most used ways to summarize all I explained so far. It is very useful to memorize how many and which alterations a specific key has.

I find very useful to memorize FCGDAEB and the same sequence backwards BEADGCF. The first is the order of sharps the second, of flats. So if a key has, for example, 3 sharps (A major) they will be the first 3 notes in the first seqence (F# C# G#).

A practical application on guitar:

If I stack on every degree two more notes a diatonic third apart (basically every other one) I end up with different kinds of triads (triad=group of three notes). These triads are shown in the example below. If we analyse the intervals between notes:

a Diminuished Triad has a min 3rd and a diminuished 5th.

Already with this knowledge we can understand how to Analyze simple songs or how to write pop songs:

If we stack another note a diatonic third apart from the last note of the above triads we will have Seventh chords.

On Guitar this note choice for 7th chords might not work…let’s see some more popular choices to play this on guitar: 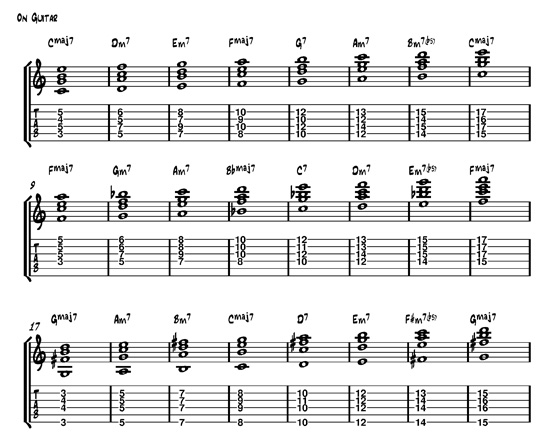 With this we can now analyse more complex songs like a simple jazz standard…watch the video:

I hope you enjoyed this lesson!