I posted this diagram on a different blog page ages ago, but I had so many emails about it that I wanted to post an update and some new pictures of a smaller enclosure.

The original was posted on January 5, 2009 and I think I did this mod (if you can call it that) during Christmas 2008. This is the original video I posted on youtube back then.

and this is the materials I used:

Of course some wire, soldering iron and a small gold enclosure (a used box of candies!)
It’s basically a volume pot in a box where the switch inverts the external tags of the pot and allows you to double the amount of presets on your Line6 MM4 and DL4 ( and should also work on AM4 and DM4) using the ‘Expression pedal morphing’ feature that already exists on this series of pedals. For the switch to work together with the pot, the pot has to be set at ‘0’ or ’10’.

I did use an external enclosure as I did not want to ruin the original box, but I have seen on youtube some guys that did this mod by drilling the enclosure at the top and placing the footswitch directly onto the case. Other further mods include adding a Status LED (you need a battery and a 3PDT switch for that. If you drill the case you should be able to take the power from the unit itself).

This is the rough diagram I uploaded a while ago, still valid: 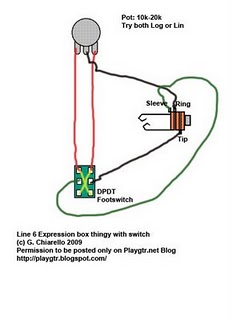 I am still using this box with my MM4 but as I need more space in my pedalboard I am now using a smaller enclosure: 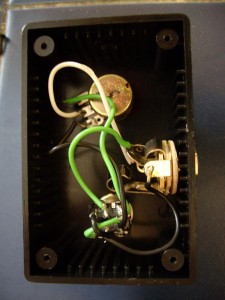 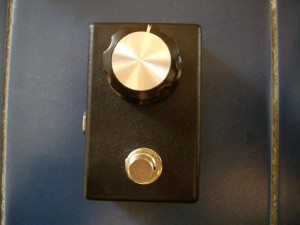 Not the cleanest wiring job, but it has been working flawlessly for over one year, so I am going to leave it as it is…if it is not broken, don’t fix it!

Disclaimer: I am in no way affiliated with Line 6, I did this for personal use and enjoyment. If you decide to do this, I will not be held responsible to any damage to your equipment or injuries.