From the major scale to the harmonized scale (Pt.1 triads)

In this video I’ll show you how to build the harmonized scale, which is vital to find out what chord belong to a specific key. In the example I am building the Harmonized scale in the key of C major. In one of the successive videos of this series you’ll see that you can use these chords to build a very simple songs in a single key.
The process is fairy simple: I stack on top of every note of the scale two consecutive diatonic 3rds. Let’s say, for example if I start from C, the two notes will be E and G. If I start from D the notes will be F and A…is this easy enough?

If I stack on every grade two more notes a third apart (basically every other one) I end up with different kinds of triads (triad=group of three notes). These triads are shown in the example below. If we analyze the intervals between notes: 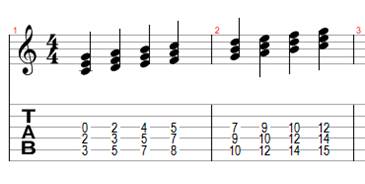 ← Intervals Explained
Understanding how triads and other chords are built →

1 comment for “From the major scale to the harmonized scale (Pt.1 triads)”